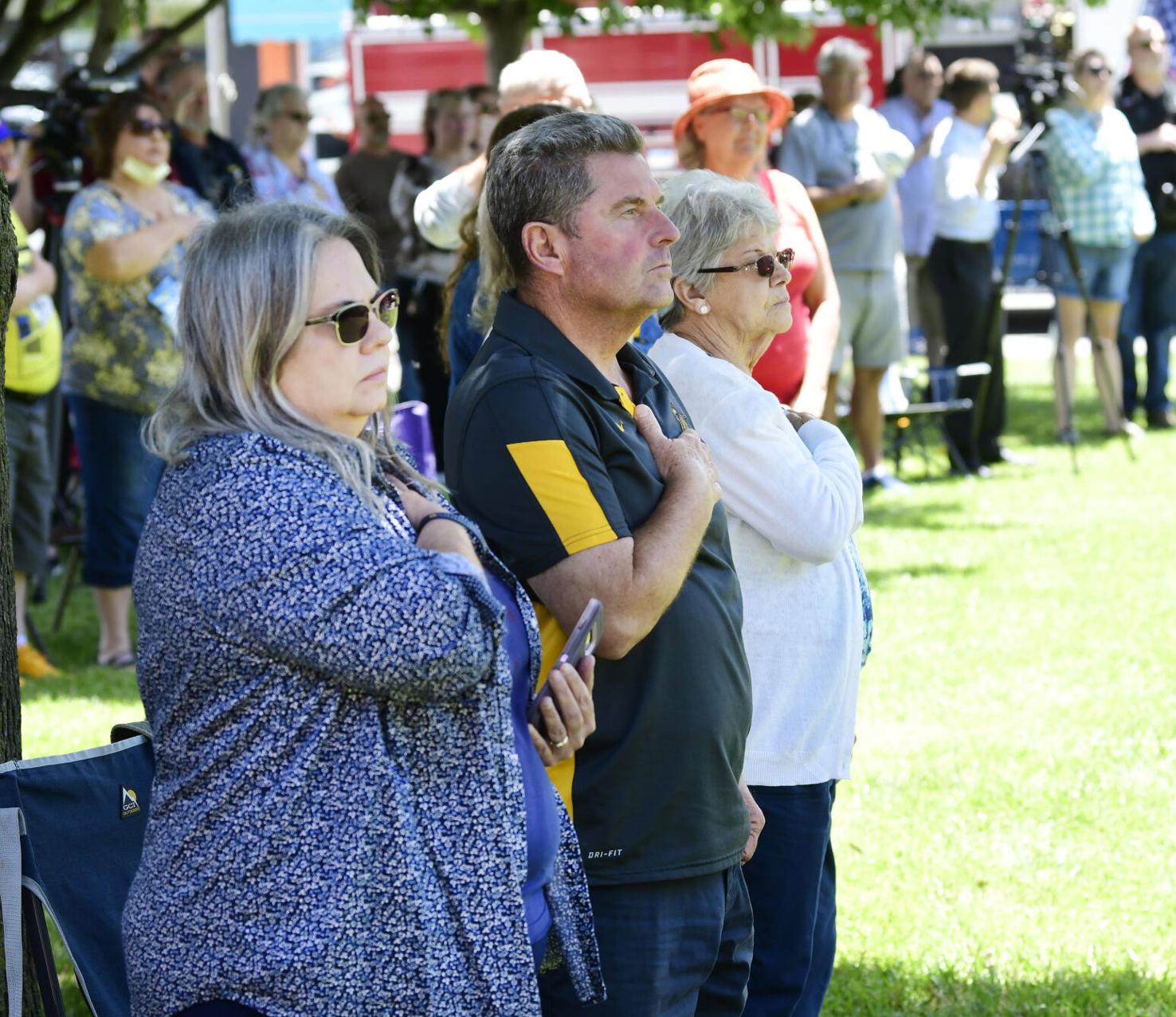 PRINCETON — Listening to live music while relaxing in the shade was part of a Memorial Day celebration Monday in downtown Princeton, but it was also a time to recognize veterans and the sacrifices they made to preserve America’s freedoms.

Dreama Denver of the Always Free Honor Flight told the onlookers about how the Honor Flight provides veterans with free visits to Washington D.C. so they can see the monuments that were erected in their honor.

“I am so excited to be out getting hugs and seeing so many people that I have missed for the last year and a half,” Denver told the audience. “We started Honor Flight back in 2011, made our first trip in 2012. We have made 10 trips since then honoring hundreds of West Virginia veterans, and I want to say that I’ve appreciated our veterans all my life. I appreciate what you have done in such a profound way. Because of Honor Flight, it taught me about the sacrifices made by each of you and your families, and how grateful we need to be every day; but certainly on days that we set aside to honor the men and women who fight for this country. This weekend is brought to you by the men and women who were willing to sign up and die for our freedoms.”

“If you are a veteran who has not gone on an Honor Flight, we would love to take you. It’s free to our veterans,” Denver said.

The Montcalm High School JROTC Color Guard presented the colors and local singer Trevor Darago sang “The Star-Spangled Banner” as the audience stood to salute or put their hands to their hearts. Local musicians Lillian Comer, Cody Bragg and Emily Grace entertained the audience with patriotic songs and raffle prizes were given away.

Commandant Doc Atwell of the Marine Corps League Mountaineer Detachment 957 came to the stage and spoke about the meaning of Memorial Day.

“A day of remembrance, a day of memories,” Atwell said. “A day to reflect on those who have come before us. Those who have paid the ultimate sacrifice for this great nation so that you and I can all stand amongst each other today.”

Memorial Day carries many meanings to many people, he stated. For some, it is a time of deep mourning. For others, it’s a day of celebration.

“And for many, it’s a day to sit back, relax, fire up the grill and enjoy a day off from work,” Atwell said. “And that’s OK, too, because we have that freedom. And to be honest, I know for a fact that the brothers I’ve lost would be right there beside them throwing steaks on the grill and pouring a few ice-cold beverages.”

“I was privileged enough to serve beside some of what I consider to be the bravest men I have ever known,” Atwell continued. “I was an FMF corpsman stationed with the 1st Tank Battalion, and deployed with RCT-7 to Helmand province, Afghanistan, in 2010. Every single day, we would wake up ready and willing to lay down our lives for each other, and that is a brotherhood and bond that I will cherish forever.”

Atwell recalled an Honor Flight trip he was able to join before the pandemic arrived and shut down so many activities.

“I can’t begin to describe in words how much that trip meant to me, but I can try,” he said. “To quote Dreama Denver, ‘There are no words to describe this feeling, this emotion that overwhelms you,’ and she is 100 percent correct.”

About 31 veterans from every theater of operation and area of conflict or war since 1945 were on that Honor Flight, but many more were visiting the memorials that day. One moment at the Vietnam Memorial was especially moving, Atwell said.

“I was standing back, taking it all in,” he told the audience. “In front of me was an elderly gentleman in a veteran ball cap, in a wheelchair, being pushed by his son. He was staring so intently at the wall, I could see him begin to choke up. His son said, ‘Dad, do you see somebody?’”

The Vietnam veteran rose from his wheelchair, moved closer to the wall, put his hand up for support and pointed to a name.

“He turned and looked at his son with his finger still on that name,” Atwell told the audience. “‘That’s Robert,’ he said. Then he sat back down in his chair and hung his head. That moment meant so much to me, and that to me says everything that needs to be said about Memorial Day.”

The importance of Memorial Day was also described by one person who left an anonymous comment on social media. Prescott read it for the audience.

“Our flag does not fly because the wind moves it,” this unknown person said. “It flies with the last breath of each soldier who died protecting it.”